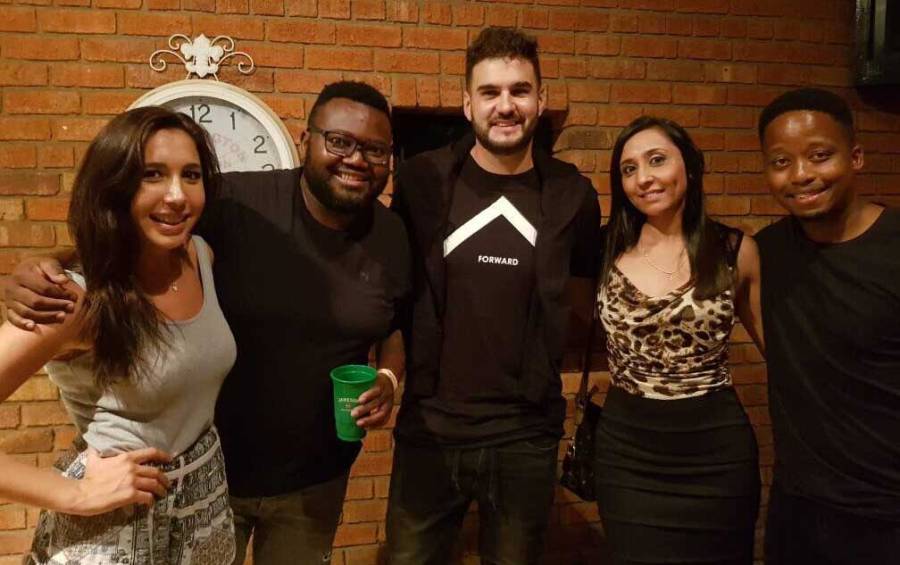 From the 29th of December until well into the early hours of the 31st, the atmosphere in Victoria Falls is electric, as though the very air with breathe is quivering with the excitement Carnival goers feel. Music vibrates through crowds of dancing bodies, the bar teems with thrilled partiers, and the entire sky is awash with colors as stage lights flood the night. Amist the craziness the carnival is famous for, Mi Casa could not look more comfortable. Dr. Duda, J’Something, and Mo-T have a platinum selling debut album, 3 South African Music Awards (SAMAs) and

thousands of fans and followers, yet this dynamic trio could not be more humble and down to earth. As I pushed through the throngs of euphoric people and made my way towards the backstage area, my heart thumped as the questions I had prepared raced through my mind like a flurry of birds. However, when I reached the group, their humble, positive and introspective energy washed away any nerves that still jittered through my veins. Mi Casa did not behave as three big shot celebrities that people can’t interact with- their wit and good nature holds a mirror up to the quintessential feel good music that they produce. The name of their group is another reflection of their appreciation of their fans and the media who they believe are key in getting them to where they are today. Mi Casa su casa means my house is your house, and J-Something explains that they want their listeners to feel that this group is your group as much as it is theirs- my house is your house, my music is yours too.

The chemistry between J-Something, Mo-T and Dr Duda is as evident off stage as it is on. They bounce off each other, laugh and tease the way a trio of friends who have grown up together would. When asked what their first thought was when driving into Victoria Falls, they answered “Beautiful” in unison. I had always imagined that they had been an incredibly talented group of friends growing up, but their union was actually a musical twist of fate. One evening, Dr Duda was djaying an event in

Sandton when Mo-T’s brother called him to come and play with the DJ. J-Something joined the two on stage and the rest is history. Dreams were realised, lives were transformed and life long friends were made. With Mo-T’s jazz background, Dr. Duda’s gospel background and J-Something’s soulful background, the world was introduced to a fusion of music that everyone wants to sing along to and has to dance along to.

When Mi Casa took to the stage, people were not just watching the performance, they were involved in it. Each song sent the crowd further into a frenzy, and even the few that were not familiar with the group were losing their minds to the sounds pouring through the speakers. As each new track began, I was determined that it was my new favorite song. That is, until the next one. When they played Your Body and Jika, it felt as though a flash mob had erupted on the dance floor. Thousands of feet pounded onto the soft grass while hands were flung into the air and bodies danced to the music. They could have played their set on repeat for the entire carnival, and I doubt a single person would have left the dance floor.

So, there are two things to add to your bucket list now- watch MiCasa perform live, and come to the Victoria Falls Carnival. It is the best way to guarantee an incredible New Year. Happy 2018 everyone!